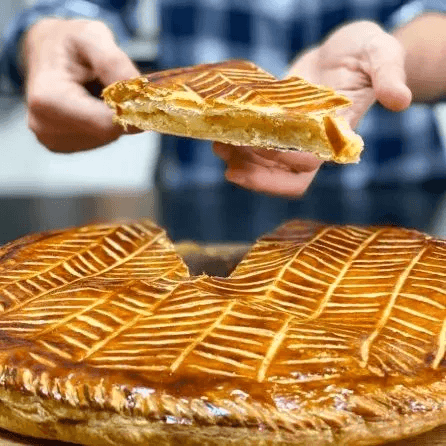 The epiphany is to be celebrated 12 days after Christmas so January 6. From now on we draw the Kings on the first Sunday of January. The date change was put in place to allow the faithful to go to church, because the epiphany commemorates the visit of the Magi who followed the shining star on the day of Jesus' birth and their journey lasted 12 days.

From 336 A.D. the Catholic Church officially declared Christmas Day on December 25, thus making it coincide with the very popular pagan festivals that had ancient rituals related to the winter solstice. The celebrations celebrating the lengthening of the days and the return of the sun also lasted 12 days.

Whatever its symbolism, this gourmet event is an opportunity to gather around a dessert of the kings to start the year under the best auspices.

Concerning the galette or brioche, it is not before the fourteenth century that the first traces of cake sharing appear on the occasion of the epiphany.

In Paris, the cake has gradually mixed with the pithiviers to become a puff pastry filled with frangipane. In the south it is a brioche with candied fruits and orange blossom that is found in the desert.

In order to delight you during the month of January, here is a selection of the best cakes of the capital:

The cake of the Kings 2022 of Pierre Hermé composed of an almond cream with orange blossom, honey and lemon, the opportunity to also taste some macaroons. Café Pierre Hermé is located at 186 boulevard Saint-Germain in the 6th arrondissement, just a 15-minute walk away.

If at the detour of a walk at Père Lachaise you take a craving for sweetness, Benoit Castel’s galette with Madagascar vanilla frangipane awaits you close to it, at 11 rue Sorbier in the 20th arrondissement.

It is through a gourmet galette that the pastry chef Pierre-Jean Quinonero of Burgundy Paris, located at 6-8 rue Duphot in the 1st arrondissement, pays tribute to Notre-Dame de Paris for winter 2022.

Mariage Frères offer this year the galette Marco Polo presenting under a glossy black lamination you will discover a frangipane and blueberries and blackcurrant, you can taste it with a selection of their excellent teas at 30 Rue du Bourg Tibourg 10 minutes walk.

If you prefer the brioches with candied fruit you will find your happiness at Ladurée at 15 rue Montorgueil.

the whole Jeu de Paume team is already salivating at these tastings.